aside A Hero’s Journey

Monday afternoon my son and I were walking to the gym from the parking lot. We have to cross a fairly busy intersection to walk in and were waiting until it was safe to cross holding hands.

We were discussing a new book we are listening to and as we were waiting a homeless man was passing us on a bike.

He and I reciprocated a small smile and a nod of acknowledgment as he was passing and just as he was almost past us my son cheerily exclaimed “Good Morning!”

I know the guy on the bike was caught off guard because he swung his head around with a big toothy smile and said “Hi” back.

I squeezed his hand and looked down smiling at him and he asked if that was nice. I told him it was very nice and that saying hello to people is really great.

I did also tell him it was the afternoon but I was very happy with his thoughts and intentions.

Today I almost made a post about the definition of a hero.

According to Joseph Campbell, an authority on the hero defines a hero as one who has given his or her life to something greater than one’s self.

To me this makes me think of my parents. Having kept a child at the age of 16 is quite a sacrifice and challenge.

There are some amazing lessons I learn every day from them.

My father has used radical honesty with me for as long as I can remember.

This needs to be better. This isn’t your best. This should have been this.

I until recently would look back and wonder about whether what I did was ever good enough.

His standard and measurement to me was perfection. I remember getting a 99 in Latin on my report card and he only said it’s not 100. The next quarter I did get 100. He simply said do it again.

His bar for me was my best effort. He was digging for it. Challenging me to be better.

In his radical honesty, he has talked with me repeatedly since I was a teenager that it’s easy to be a yes parent. To say yes to your child to shut them up and keep them appeased.

My dad was a no parent. It takes a great deal of fortitude to be a no parent. What I have started to realize is that the no in being a no parent is very broad.

In hindsight, I see this, but at the moment it wasn’t apparent to me. I would just think, what an a***ole.

I don’t have a problem saying that my father is my hero. I’m 35, I have a doctorate, I have failed repeatedly in my life and will continue to do so and I am a grown man. My father is my hero because of his sacrifices and his foresight to make the hard choices in life early with me so that things would be easier later.

I am and I hope I always will be a work in progress. I love learning. I love knowing. Failing sucks but getting it right afterward feels amazing.

I hope I continue to learn these lessons and see them as I get older so I can pass them on to others I care about and to give thanks to those who teach them to me.

Today, say hi to someone you don’t normally say hi to, stranger, co-worker, whoever.

From every day to accepting only your best. It will bleed into those around you, in all aspects of life.

Do not be afraid to tell someone they are important to you. You never know when that last opportunity will come. 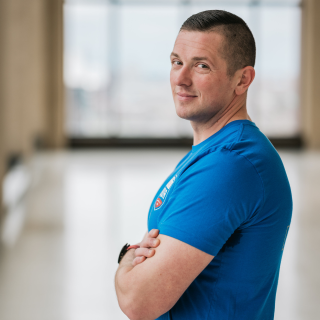